You are here: Home / About us / Our history 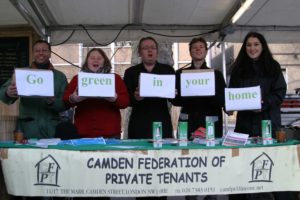 Camden Federation of Private Tenants (CFPT) was set up in 1980 as a mutual support group to help tenants (renters) organise and campaign for their rights. Since this time it has provided a voice for all private tenants in Camden.

Over the years as the other funded tenants organisations disappeared, CFPT and Brent Private Tenants Rights Group (now called Advice4Renters) became more important representing private tenants on a regional and national level as well. To do the regional work more effectively, we set up Renters’ Rights London (RRL) project in 2014 and continue to run it.

After many years of campaigning, CFPT was instrumental alongside the Campaign for Fairer Fair Rents and others in the implementation of the Maximum Fair Rent Order 1999 (or Rent Cap as it is more popularly known) which offered some protection for Regulated (or Rent Control) tenants against rampant rent rises based on ever-increasing market rents. 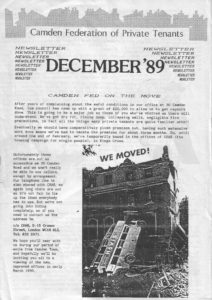 However, the successive Housing Acts of 1988 and 1995 eroded private tenants’ rights, and saw the introduction of Assured Shorthold tenancies as the new default tenancy. The vast majority of tenants now have these short-term (offered for 6 or 12 months on average) tenancies – that provide even less protection from the worst agents and landlords, declining standards and spiralling rents.

We were also part of a coalition of groups that came together and campaigned successfuly for a Minimum Energy Efficiency Standard in the PRS, which makes it illegal for private landlords to let out very energy inefficient properties from April 2018.

Increasing numbers of young people, families and vulnerable low income households are now moving into the sector – which means that we have had to also grow and evolve as an organisation, if we wish to continue claiming to be the “voice of private tenants in Camden”. 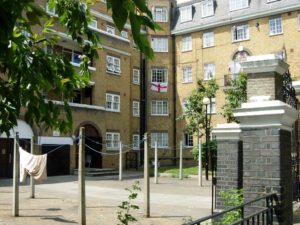 The number of housing association tenants who have joined our organisation continues to grow rapidly, and this group represents 11% of Camden households, according to the 2011 Census.

In response to this and following a recommendation made by the Council’s Housing Association Scrutiny Panel, we have set up what we believe is the first ever borough wide group for these residents.

So, the CFPT story that started way back in 1980 continues…