You are here: Home / Information and advice / How we can help

Here are some of the ways we have helped and supported individual private renters with their problems. Please note: We are NOT a legal advice agency 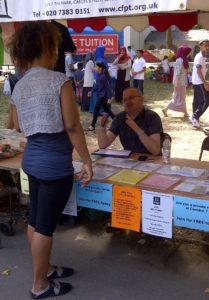 Had left the property she was renting with her friends, but was still in dispute with the agent about questionable deductions from the deposit amounting to over £3,800.

The deposit had been held in one of the government approved schemes, but because she was not familiar with how the system works, the agent had managed to get her to release it to them.

We told her that it looked like a money-making opportunity by the agent and that she may need to pursue the matter via the small claims process to get the matter resolved.

We signposted her to the local Shelter advice service and suggested that she make an appointment with them as a matter of urgency.

Lived with his son and contacted us because contractors acting on behalf of the agent were not making appointments with the tenant and accessing the property by climbing over the garden fence.

He had also discovered that the communal lighting for the building shared with 3 other flats was being run off his meter.

We contacted the agent and got them to agree to update all of their contractors as to how to make the appropriate access arrangements and to agree a payment of £30 per quarter for the communal electricity usage.

We also negotiated that this be backdated to cover previous years’ usage.

Contacted us because she does not have adequate heating, was struggling to pay her rent and had serious health problems.

We immediately referred to her to WISHPlus a multi-agency referral service run by Camden Council that we are part of, and a home visit was soon arranged.

She subsequently received a benefits check, a falls assessment, energy efficiency advice and the possibility of a grant for insulation, draught proofing and new central heating.

⇒ ‘J’ a private tenant living with her daughter

Had a problematic relationship with her landlord for a number of years, who made her life as difficult as possible, in the hope that she will move out.

The relationship has been made worse by Camden Council’s environmental health department demanding that he carry out extensive improvement works to her home. Sadly, the landlord used this as an opportunity to make her life more difficult than usual.

She has also suffered from anti-social behaviour from the tenants who live upstairs.

We supported her through her difficult dealings with the landlord, advised her how to deal with and record incidents of anti-social behaviour and involved the appropriate Council team.

Came to us because of a series of incidents of theft (£1,800 cash plus credit cards were taken in one burglary), noise, harassment and threats from the agents acting on behalf of the landlord who lived abroad.

The tenant who was also suffering from mental health problems explained that she felt scared and vulnerable in her home, due mainly to the fact that agents were also her neighbours. She also said that the previous tenants had experienced similar problems while living there.

We immediately recommended that she get housing advice (she contacted Shelter) and because of the ongoing situation with her neighbours, that she look to move out and live somewhere where she felt more safe and secure.